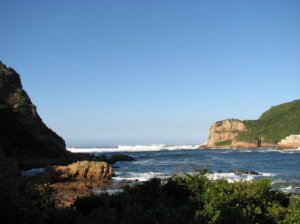 From the town centre of Knysna, we followed the signs all around the vast lagoon (which belongs to the Knysna National Lakes Area), and into the confusing streets near the Heads. We wanted to find the top viewing site, but missed the turn-off, and ended up at the lower viewing site. (I later discovered a site on the internet that takes a picture of The Heads every 30 seconds. So Big Brother may be watching you!) 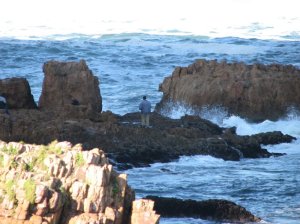 We had coffee and my long-awaited-and-yearned-for café mocha at the East Heads Caffé, where we sat outside on the deck overlooking the lagoon. We phoned the places we were thinking of visiting (Tsitsikamma Canopy Tours at Storms River Village, and the Elephant Sanctuary at The Crags), to get directions and book for the next available tour.

And then, feeling adventurous – and probably a bit hyper from the coffee, we tackled the narrow path to the viewing site right at the end of the cliffs. (I’m not sure it was really the “official” viewing site, by the way.) 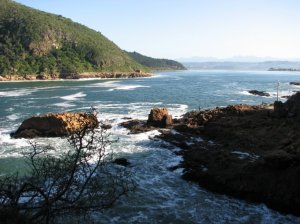 This wasn’t exactly my image of fun: clambering over jagged, sea-spray slippery rocks, waves crashing a mere 2 metres vertically below us, ducking partly through the mouth of a cave, across a sturdy wooden plank bridge (sigh of relief), down a slope covered with loose shale and gravel, grabbing onto bushes as we slid by, and around a corner to a small sandy area where – thank heavens – not even fearless Richard could venture any further along a non-existent path… 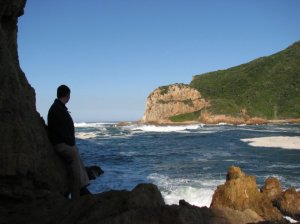 So we turned around.