In September last year, we’d set out to explore the Hillcrest Path at Silvermine West, but we’d been caught out by the rain and the fog, and reluctantly did a u-turn on the mountain. Yesterday, however, was the perfect weather for hiking – relatively cool, a slight breeze, a bit of cloud cover, and just enough sunshine to warrant the application of sunscreen. So I figured we’d give this route another try. 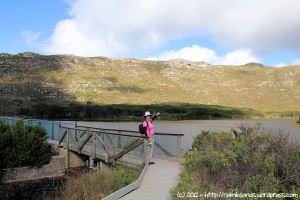 See that ridge up there? That's where we are going today!

We set off from the reservoir shortly after 9am, and trudged vaguely southwards up the gravel road. A couple of cyclists on their mountain bikes came careening down the track from the top of the ridge, wooshing past us on the loose gravel. Some way up the hill, we turned right off the main track and onto a narrow path, and immediately found ourselves among the dense fynbos. Bees were happily a-buzzing around the flowering bushes of heather, no doubt collecting copious amounts of pollen for their hives.

Even though we were only halfway up the ridge as yet, the view down to the reservoir was just beautiful. Can you see the expanse of blue water? 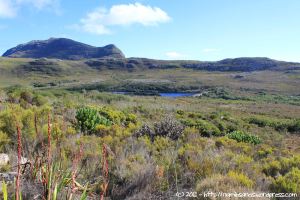 The reservoir lies in the valley below us

Soon, the path began to climb steadily. Handy slabs of rock had been used to create steps for weary hikers, trudging up and up and up…

Everytime we go walking up here in the reserve, I marvel at how much heavy, backache-causing work it must have taken to create these paths, which we take so for granted. They are thoughtfully laid-out and well-maintained, and obviously much used, with the vegetation not getting a chance to grow over the path. 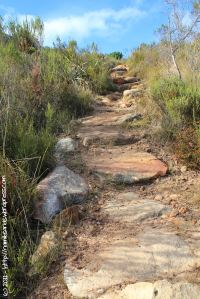 Eventually, we reached our first landmark – Shelter Rock. This is a handy overhang, with a most remarkable view – south towards Fish Hoek and Simon’s Town, east towards Muizenberg, and north towards the reservoir and the ridge that encircles the little valley on the far side. In the picture below, we’ve just followed the path past it, and are looking towards the east. In the haze on the horizon far beyond lie the Hottentots Holland mountains.

It was too soon to have a picnic though, so we motored on, scrambling up and down and up and down a particularly rocky section, where I needed my hands to keep my balance and to protect the camera, so I didn’t take any photographs. Shortly afterwards, a flat expanse of rocks provided us with a spectacular view southwards, all the way beyond Noordhoek, Fish Hoek and Simon’s Town to the mountain ridge of Cape Point (in the faaar distance on the left in the photo below).

View south all the way to Cape Point

In the next photo, the curve of white sand along the blue ocean is Noordhoek Beach, one of the most beautiful, pristine beaches in the southern peninsula. It’s a popular beach for dog walking and horse riding, and there’s even a historic wreck (the Kakapo) on the beach that can be explored. But the beach has unfortunately become a hotspot for nastier criminal elements, so it is no longer advisable to walk there on one’s own. 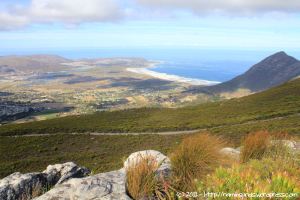 View across the southern peninsula - Noordhoek beach and the wetlands

At the next landmark on the map, Breakfast Slab, two friendly hikers were having a picnic and a rest, so we greeted them and continued onwards to find our own ‘Breakfast Slab’.

Some distance further, we found ourselves a perch on a couple of flat-ish rocks, on the north-facing edge of the ridge. We had a glorious view across the entire amphitheatre formed by the two ridges that surround the reservoir, which looks rather like a large triangular-shaped pool of water in the bottom of a bowl. We companionably munched an apple and a particularly juicy peach, and then balanced the fruit sugars neatly with a shared chocolate croissant and some cups of hot tea.

Ahhh, these picnics on the mountain are simply the best!

Our picnic spot on the hillcrest path around the natural amphitheatre

It was so relaxing to sit up here.

There was a gentle breeze blowing from the south, and the clouds scudding far overhead occasionally provided some much-appreciated shade from the sun. The rocks were warm beneath our backsides, clearly reflecting the warmth of the sun. There was an ever-so-slight fragrant smell of fynbos in the air. From time to time, a colourful butterfly flittered past, alighting on a brightly coloured flower for a few breaths, before taking to the air.

An unusual butterfly on the path

We could catch snatches of voices of other hikers, who must have found a picnic spot further back along our path. In the clear blue waters of the reservoir, swimmers were creating a v-shaped pattern of ripples, as they moved through the water. If we listened really closely, we could just hear the voices of picnickers down by the water, and kids yelling and squealing, as they exuberantly chased each other into the water.

After a while, we packed our things away, and set off along the path once more. In the far distance, on the top of the Constantiaberg, we could make out the tall mast. Not too long ago, we’d hiked up there.

Our path took us around the western ridge, past two landmarks that were described intriguingly on the map as ‘Dragonback Passage‘ and ‘Blind Man’s Bend‘. Unfortunately, we couldn’t figure out exactly where these were, so we’ll have to go back for a closer inspection. 🙂

The reservoir lies in the valley below

The next section, until our small track joined the broad gravel road that ascended from the reservoir along the northern shore, was pleasantly easy walking. Judging from the type of vegetation, there must be some water running down these slopes during the rainy season. The gravel road, with its particularly steep sections cemented, took us very quickly down to the reservoir.

This had been a really nice and scenic route!

6 thoughts on “A Picnic with a View: The Hillcrest Path all around the Silvermine Reservoir”