The miracle we were hoping for has happened.

Although I’d frequently logged into the WorldTracer website over the last days, there were no status changes – they were still trying to locate hubby’s suitcase, which had gone missing somewhere between Santiago (Chile), Sao Paulo (Brazil) and Johannesburg (South Africa). 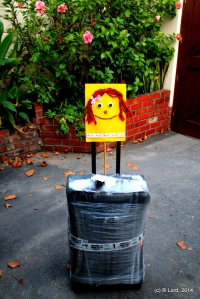 So you can imagine our surprise when our dear friend Kim, a veteran of the travel industry, who had done some investigation from her side, confirmed that hubby’s suitcase had not only been found, but was on its way home!

Then, this evening, the phone rang. A friendly lady from SA Airways asked me to confirm my address, and declared that they would be delivering our lost-no-longer suitcase to our doorstep imminently.

And indeed, not much later, the bell rang – and there it was!

Our cheerful friend Flat Kathy, who has just returned to South Africa after months away in the US, Australia, the Seychelles, Germany and Denmark (have a look at her recent blog update), was impatiently begging us to open the suitcase and free dear Edward T Bear from his prison.

“He must be starving by now,” she declared. “I know all about being stuck in an envelope for weeks, travelling by mailbag. It’s cramped, and uncomfortable, and there’s no food and no entertainment. Poor Edward. Do hurry up!”

We needed no further prompting, and quickly unpacked the suitcase… to find Edward T Bear beaming up at us from between several pairs of soft socks. 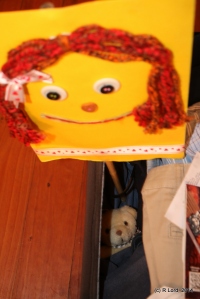 Oooh! Look! There he is!

“Flat Kathy?” exclaimed Edward T Bear incredulously, looking up at his friend. “What on earth are you doing here?”

“It’s a long story,” I told him. “But you must have quite a story to tell us, Edward. What have you been up to?”

“Well, the last thing I really remember with any clarity was Richard tucking me in among his clothes, and telling me to make sure that his suitcase got home to Cape Town,” said Edward T Bear.

“And so you did,” declared Flat Kathy, beaming brightly at him.

“So what happened?” I prompted. “So many people have been looking for you, Edward.”

“Well, I didn’t even know that I hadn’t made it onto the right plane,” said Edward T Bear. “It was rather squashed in there, you know. They tossed me about quite a lot. I felt very nauseous sometimes.”

“Oh, you poor thing.” I looked accusingly at hubby. “I told you to put Edward into your rucksack and to take him onto the plane. He would’ve loved to fly in the cabin with you.”

Hubby sighed, and gave me a look. “I’m not taking a teddy-bear onboard an aeroplane. No matter how small or cute he is. Besides, Edward T Bear had orders to make sure my suitcase made it home. And he did. If he’d travelled with me in the cabin, my suitcase would still be lost.”

“Quite right,” Edward T Bear pitched in bravely, trying to defuse the situation. “I had my orders. And besides, I had this interesting booklet to read, all about the Atacama region of Chile, so I wasn’t bored.”

“Alright, well, now that that’s cleared up, how about we have some tea and toast for supper?”

And so we did.

And that was A Happy Ending.