The spectators who arrived for the dress rehearsal of the Cape Town Military Tattoo 2013 at the Castle of Good Hope were treated to an absolutely brilliant show. Any problems that had manifested in the run-throughs of the previous two evenings seemed to have been ironed out, and I was blown away by the quality of the performances. This was echoed by all the people I spoke to on the sidelines, both during and after the event.

And this was despite the fact that it – thankfully intermittently – drizzled and spat, poured and bucketed with rain, throughout the evening. Hopefully, the Cape Town weather gods will have mercy on us for the remaining three nights, and reward us for our perseverance and fortitude with a series of those glorious blue skies we often have during springtime! 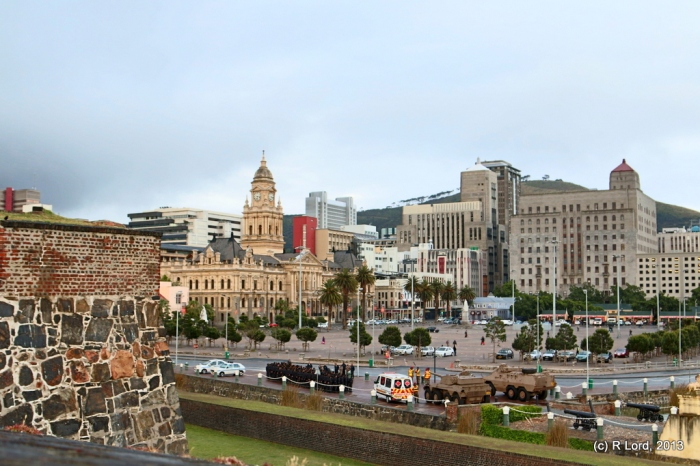 City Hall in the distance, Chrysalis Students in black in the foreground

Although the day hadn’t started quite so wetly, it had been raining intermittently throughout the afternoon. The grass on the parade ground was soaked and slippery, with muddy patches splattering the bottoms of trousers. The protective black rubber mats laid across the ancient pathway from the main gate to the Kat archway were glistening in the reflections of the lights. The howl of sirens some distance away in the city centre made our small group of photographers rush outside the main entrance, in the hope that it was finally the guns of Cape Field Artillery arriving with their police escort – always an exciting moment.

Instead, it turned out that there was a housing and service delivery protest going on in the city centre, and that police and medical rescue vehicles were rushing to the scene. Eventually, though, the four 25-pounder guns of Cape Field Artillery arrived, with the big SAMIL 20 gun tractors cautiously making their way down the cobbled path leading to the huge main entrance gate of the Castle. Under the watchful eyes of MWO Bennie Havenga, the Regimental Sergeant Major, and Lt Col Kees de Haan, the OC of CFA, the guns were unhitched and man-handled into their traditional positions to the left of the pathway. The salvoes fired by these four big guns are the highlight of every year’s Tattoo, their firing being synchronised with the music of Tchaikovsky’s 1812 Overture.

The four guns of CFA are in place

Outside the Lion Gates, a big Ratel armoured vehicle from the Cape Town Highlanders and the impressive Rooikat of Regiment Oranje Rivier, as well as an ambulance from the South African Military Health Services, had taken up positions on either side of the entrance. For first-time visitors to the Cape Town Military Tattoo, I think it must be quite a sight, to be greeted by these imposing vehicles, and then to see the four powerful CFA guns, all before they even walk through the historic Van der Stel Gate!

As the afternoon turned to early evening, and the setting sun painted the cloudy skies above Cape Town in lovely golden and pink hues, the spectators found their places on the damp (okay, wet) seats, huddling together for warmth and sheltering under umbrellas whenever they could. The coffee sellers proved highly popular, judging from the number of people standing around, clutching paper cups with both hands, gratefully sipping the hot drinks.

Behind the scenes, the band members who were getting ready for their act were tucked into whatever shelter they could find, rubbing their hands to keep the fingers warm, and intermittently blowing into their instruments to ensure that they remained warmed-up and thus in tune. The singers too were warming up their voices, boots were buffed to a shine, and costumes and uniforms were given a final once-over. The lighting and sound crew from 3 Electrical Workshop of Wonderboom were conducting their final checks, and wrapping protective rain-covers over their more sensitive equipment. The ROR wranglers made sure the props they needed to carry onto the arena were in the right place, and the CTH gun patrol and the ‘baddies’ they would be ‘dealing with’ during their simulation exercise, were checking their gear. The Military Police with their reflective orange and yellow jackets and the security personnel were in their allocated places, controlling access to the various areas.

As the spectators and invited guests began to arrive through the Van der Stel Gate, the ushers with their glowing sticks were kept busy, helpfully directing people to their seats. A large group of students from Chrysalis Academy in Tokai, all in matching black tracksuits, had arrived to see the show. Other Chrysalis students and instructors were on hand as ushers; earlier in the afternoon, they had carefully gone over the seating stands to make sure that all the number labels were firmly affixed.

Billowing smoke from the firing of the guns outside

As a result of the rain, the SA Navy Band with their drum kit, keyboard and guitar had retreated from the platform they had used during the rehearsals, and set up all their equipment underneath the Kat balcony. They played some lovely background music, creating a suitably festive, relaxed and welcoming atmosphere, as the audience began to settle into their seats.

They were followed by the Silverstars Christmas Band, a group of very talented young musicians. Shortly before the start of the main show, the functionary, Major General Roy Andersen, Chief of Defence Reserves, was escorted to his seat by Capt (SAN) (Retd) Trunell Morom. And then, as the Castle bell rung eight times, a thunderous cannon shot rang out, making all the spectators jump.

The Castle Guard ceremonially closed the doors to the main entrance gate, and delivered the key to the Castle Commander, played, as always, by Captain Francois Morkel. And then, the show began! The fact that the spectators stayed for the whole evening, despite the intermittent showers of rain that saw some dashing to shelter underneath the roofed colonnade, was clearly testimony to the professionalism and passion of the performers, who played their hearts out.

There are only three performances left – tarry no longer, reserve your seats! And ask the weather gods to send us excellent weather!

The four guns of CFA are in place

City Hall in the distance, Chrysalis Students in black in the foreground

The four magnificent guns of CFA

The young musicians of the Silverstars Christmas Band 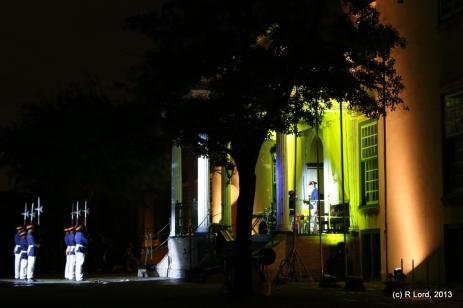 A line of pipers advances

A line of drummers

The rain seems to have collected on the big drums 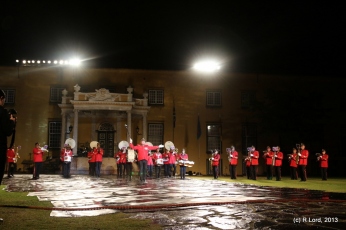 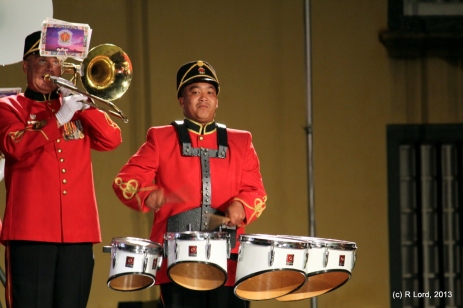 He looks so calm…

Until he gets drumming! 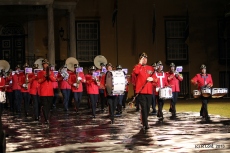 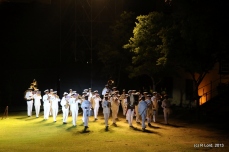 The Navy Band interacting with the audience

Billowing smoke from the firing of the guns outside

4 thoughts on “The Cape Town Military Tattoo 2013 must go on – despite the rain!”