Update: The article I wrote about this event was published on the Reserve Force Division Website. Here is the PDF document.

I am absolutely thrilled to be able to share this news with you – it is all systems go with the Cape Town Military Tattoo 2012!

You may recall that I was racing around behind the scenes of the 2010 Tattoo with my camera and my notebook, having a fabulous time getting to know all the dedicated people and talented performers who work and rehearse so diligently and for such long hours to make this exciting event happen. Last year, unfortunately, the Tattoo had to be cancelled, although we were treated to a sunset picnic and concert on the lawns of the Castle instead.

Two weeks ago, the official media launch for the 2012 Tattoo took place, and I was one of the ‘journalists’ invited to attend. 🙂 I can tell you that it was wonderful to see some of the same people again that I’d gotten to know in 2010, and to recall that feeling of camaraderie and being part of something bigger. It felt good.

On the more technical side, I had forgotten just how tricky it is to get good photographs in low light… yes, you can use a flash, which I resorted to in desperation because my images were turning out too dark. But ambient lighting really gives a better image, and the flashing of the flash is distracting for both spectators and performers.

The problem is that marching bands march, so you can’t really use a slow shutter speed, or you’ll just end up with a blurry shot. And handholding a slow shutter speed is also tricky, even if you stabilise yourself by leaning against pillars, tucking your elbows in, or kneeling down and using one of your knees as a prop. Amping the ISO too high creates graininess, which also isn’t nice. Opening the aperture too much means that there isn’t sufficient depth of field, and the focus needs to be really spot-on, which isn’t always easy to see on the little LCD monitor…

Shooting in RAW mode, which I haven’t tried much before, might help, but it uses up megabytes and given the sheer volume of photos I am likely to take, I am going to run out of space on my memory cards and computer fairly soon. Anyway, it was downright fiddly, and I’m clearly going to have to get some practice in beforehand! 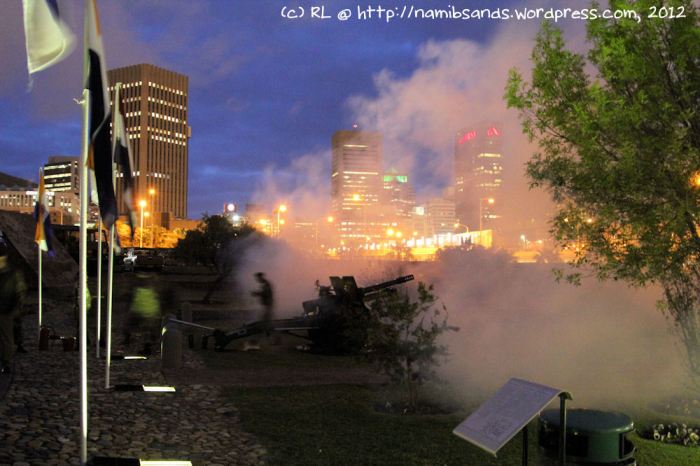 Since the media launch, I have written a little article, which I have permission to include on my blog.

From 31 October to 3 November 2012, the magnificent 330-year-old Castle of Good Hope will proudly host the seventh Cape Town Military Tattoo 2012.

The word “tattoo” is derived from a centuries-old military ritual, which originated in the Low Countries during the 80 Years’ War in the 16th and 17th centuries. Each evening, before nightfall, patrols would be sent out to warn off-duty soldiers that it was time to return to the garrison for the evening parade and guard duties. Tavern-keepers would be ordered: “Doe den tap toe!” (Close the taps on your beer-barrels). All the armies in the Low Countries adopted this nightly ritual. Over the centuries, it became a unique and colourful show, known as a “tattoo” in English, “taptoe” in Dutch and “Zapfenstreich” in German.

At the start of the media launch, the organisers, supporters and media representatives enjoy some drinks

At the Castle of Good Hope, the oldest military headquarters in the country, a drummer would be sent up to the Leerdam Bastion to beat his drum, thus signalling the off-duty soldiers to return to their barracks. To mark the start of the Cape Town Military Tattoo, the smartly dressed Castle Guard Halberdiers re-enact the traditional Key Ceremony, locking the massive gates of the Castle for the evening.

As in previous years, Tchaikovsky’s famous 1812 Overture will be performed, as it should be – to the accompaniment of thunderous gunfire from the ceremonial 25-pounder guns of the Saluting Troop of Cape Field Artillery: always an unforgettable experience! During the Final Muster, all the performers return to the arena to wish the audience farewell, and the show concludes with the Lone Piper on the roof of the Castle, bidding a final good night to the audience.

Last year’s Tattoo had to be cancelled for operational reasons, and a relaxing sunset picnic on the lawns of the Castle, followed by a wonderful concert of military music, was held instead.

It is thus exciting news that the 2012 Tattoo is going full-steam ahead!

The production team is already hard at work preparing a fabulous programme that is certain to thrill and delight both locals and visitors from afar. These dedicated Regular and Reserve Force members of the South African National Defence Force contribute an enormous range of diverse skills in many fields, and can draw on previous years’ experience of organising the Tattoo.

This event is also actively supported by the City of Cape Town. Experience around the world has proven that a first-class Tattoo is an invaluable long-term strategy for growing the tourism industry; an outstanding example of this is the Edinburgh Military Tattoo in Scotland, which takes place in August every year.

The two bands sound amazing together

On Thursday, 20 September 2012, the media launch for the 2012 Tattoo was held at the Castle. The SA Army Band Cape Town in their striking scarlet tunics gave a polished display of their musical and marching skills, once again demonstrating why they are such crowd-pleasing favourites. Cape Field Artillery Pipes and Drums, in their scarlet Royal Stewart tartan kilts, brilliantly white shirts and black vests, were led out by Pipe Major Staff Sergeant Andrew Imrie. Together, the two bands performed ‘Highland Cathedral’. Thereafter, the guests were taken outside the main Castle gates, where Lt Col Kees de Haan, OC of Cape Field Artillery, spoke briefly about the CFA’s 25-pounder guns. The show ended with a single thunderous shot from one of these guns, amidst billowing smoke.

A media briefing followed in the Het Bakhuys Simon van der Stel room, with Brig Gen BC Gildenhuys, GOC of the SA Army Armour Formation, giving a presentation on the 2012 Tattoo. He pointed out that the greater purpose of this event was to promote a positive image of the SANDF, to foster a good relationship between the armed forces and the community, and to involve the youth of Cape Town. 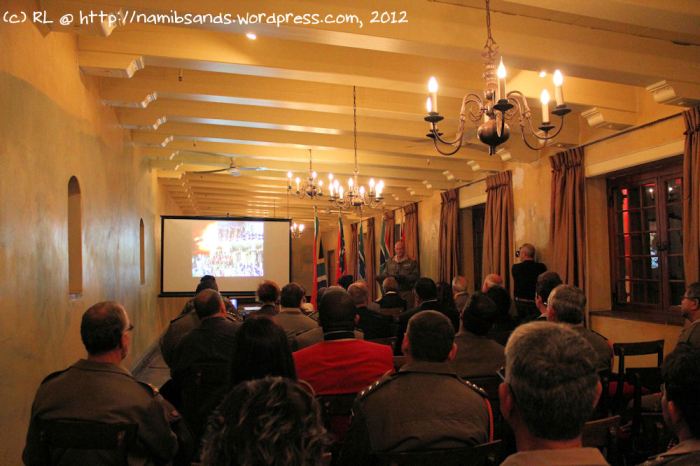 The theme of the 2010 Tattoo had been “A Tribute to the Unsung Heroes” – an acknowledgement of the men and women of the military support services, who provide combat support. It thus featured a breath-taking mock attack on the Castle to illustrate the important role played by the medics, as well as a historical stretcher drill dating back 100 years, which was re-enacted by 3 Medical Battalion Group.

The theme of this year’s Tattoo is “A Tribute to the Military Musicians”, with homage being paid to the men and women of the military who support the services with their music.

Much-loved favourite bands, such as SA Army Bands of Cape Town and Kroonstad, the Pipes and Drums of Cape Field Artillery and of 1 Medical Battalion Group, as well as the Drums and Pipes of the Cape Town Highlanders, will be participating in the 2012 Tattoo. They will be joined by two visiting bands that have not been seen here before: the Botswana Army Band and the Het Historisch Tamboerkorps van der Koninklijke Marechaussee of the Netherlands. In addition, spectators will also be entertained by several youth groups, including the Orchestra Band of Wynberg Boys High School, the Celtic Dancers, and the Drill Squad of Chrysalis Academy.

This year, there will be four performances, from Wednesday 31 October to Saturday 03 November 2012. Tickets for adults cost R120.00 on the centre stand and R100.00 on the side stands, and R50.00 for children from 6 to 12 years of age. Children under 6 years get in free. Bookings can be made online at Computicket.

Gates open at 17h30, and spectators must be seated at 19h45, as the show begins punctually at 20h00. Safe parking will be available on the Grand Parade in front of the Castle. Refreshments will be on sale at the De Goewerneur Restaurant. For further information, you can contact the Defence Reserves Provincial Office Western Cape (DRPOWC) at the Castle on 021 787 1162 or via email to defencereserveswc @ gmail.com (remove the spaces around the @ sign).

Call up your friends, email your colleagues, make your travel plans, and book your seats!

Whatever you do, do not miss the Cape Town Military Tattoo 2012!

And for those who have difficulties viewing the slideshow, here is the gallery too.

At the start of the media launch, the organisers, supporters and media representatives enjoy some drinks

Together, they play the beautiful Highland Cathedral

The two bands sound amazing together

The Army Band marches off first, followed by the Pipes and Drums

The imposing Castle gate in the evening light

Brig Gen BC Gildenhuys, GOC of the SA Army Armour Formation, gives the presentation on the 2012 Tattoo

She also introduces Capt Vernon Michels of the Army Band, and one of the drummers of the CFA Pipes and Drums