On Sunday morning, 17 June 2012, Richard and I drive out to Somerset West/Gordon’s Bay. As part of my research for the Feature Writing Course I am currently enrolled in (see my previous post), I have arranged to meet Louis Joubert, the manager of the Cart Horse Protection Association‘s Recovery and Rehabilitation Centre at Firlands.

At the R&R, the horses have so much more space here to graze and roam than they do in their usual surroundings in the city

Following Louis’ directions from the N2, we soon arrive at the R&R and park our car in the shade of some trees. We are immediately surrounded by an assortment of excitedly barking dogs. Fortunately, they are all very well-behaved and, realising that we are not intruders, settle down quickly.

Louis, casually dressed in jeans and jumper, welcomes us to his turf with a friendly smile and a firm handshake.

“So, shall I give you a guided tour?” he offers.

“That would be great,” I reply, grabbing my camera. “How is Molly doing?”

He looks at me, questioningly. 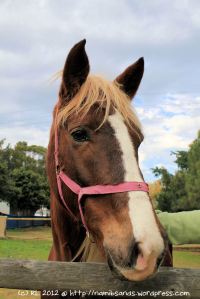 Molly has such a beautiful face

“I happened to be there when Diana picked her up from Philippi,” I explain. “She was hardly able to walk, so I’m really curious to see how she is now.”

“Molly’s doing great,” he says, “much better. Do you want to see her?”

We walk across to a large paddock near the stable block. There’s Molly! I recognise her immediately. She is indeed looking soo much better.

“She’s a little difficult,” Louis cautions, “she’s already bitten someone, but I’ll go and fetch her.”

Oh dear. I’d naively hoped that Molly might recognise me and that she wouldn’t mind me saying hello and patting her. Louis climbs through the fence and brings her over, holding firmly onto her halter. Looking around, I notice that all the horses in the various paddocks are wearing halters – this probably makes it easier to catch hold of them and bring them back to the stables every evening. Molly looks very alert, and I like to think that she did recognise me, as she allows us to pet her without nipping us. She is looking well rested. Clearly, this place is living up to its name! 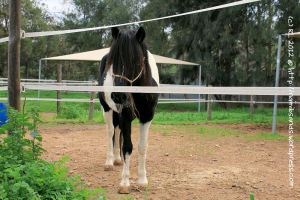 We follow Louis along a path between several paddocks, and I notice that some of these are encircled with white tape.

“That’s electric fencing,” explains Louis, “so try not to touch it. It’ll give you quite a shock.”

He explains that these paddocks house the stallions, and the electric tape discourages them from going after the mares, especially when they are in heat. Louis explains that there is a lot of backyard breeding – and in-breeding – going on among horse owners on the Cape Flats. It is difficult to keep track of this, and to keep it under control. Most of the cart horse owners prefer not to geld their stallions, in case they want to breed with them. And they also argue that it takes away their vitality and spiritedness. Ironically, though, gelding them would make them much easier to handle, and less likely to cause trouble around the mares.

He shows us a dark bay horse called Survivor (I did not photograph him, but this is what he looks like). He is up for adoption, like several other horses at the R&R that have been signed over to the CHPA after being confiscated by them, or willingly surrendered by their owners. Louis tells us that he used to work for the SPCA’s Horse Care Unit in Grassy Park, until he joined the CHPA three months ago, and that he is focusing his efforts on the adoption programme. 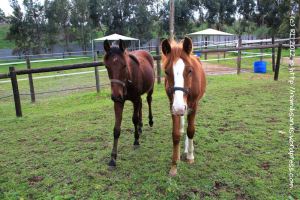 The next paddock houses Teeno, a piebald, who had been signed over to the CHPA at the start of this year (2012), and who is also available for adoption. Like all the horses here, Teeno too has a story to tell: He had developed colic some time in November last year, and someone had decided that it would be a good idea to tube him and pour “herb water” into him as a home remedy. The treatment backfired, badly, and caused him to develop pneumonia. The inspectors rescued him and brought him back to the Epping clinic, where it took a week of medical treatment and close supervision before he was stable enough to be trucked to the R&R. The owner was informed that Teeno’s days as a working cart horse were over. It took another three months before he recovered fully – and in the meantime, he was signed over to the CHPA.

Then we meet the four foals, who are all together in one paddock: Klein Helen (aka Orphan Annie), Klein Karin, Klein Broertjie and Prince Edward. They follow us around, like inquisitive youngsters, asking to be touched and scratched, and you can’t help loving them right back. 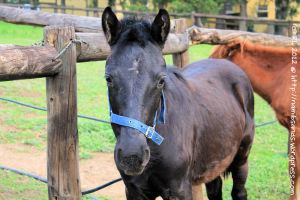 Prince Edward – aw, how can you not love this face?

Orphan Annie, the chestnut with the white blaze, is a cute – and feisty! – filly. She has appointed herself as the boss of the group, and tells the others what to do. She came to the R&R when she was only two months old – her mom, Helen, had died during a motor vehicle accident on the Stellenbosch Arterial Road. I ask about the strange warts growing on Klein Karin’s nose, but Louis reassures us that they are nothing to worry about; in fact, they are getting better. Klein Broertjie looks rather scruffy with his thick fur, and I rather like Prince Edward, whose mom – Blondie, in the adjoining paddock – is also a guest at the R&R at the moment.

When we climb through into the next enclosures, the foals decide to entertain themselves – and Orphan Annie gets rid of some excess energy by chasing her ‘herd’ around the paddock, playfully nipping and high-kicking with exuberance. They are so entertaining to watch!

“This is Oumie,” states Louis, walking over to a beautiful strawberry roan mare, and bringing her over so that we can pet her. “She is also up for adoption.” 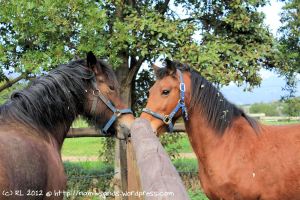 I wonder what secrets Oumie and Beauty are telling each other?

Oumie developed lymphangitis last year – an inflammation of the lymphatic channels. Her owner, Mr Slamdien, called Diana and asked her to put Oumie to sleep, but Diana thought she would try to treat the mare, because she has such a sweet gentle nature. Once the vet diagnosed lymphangitis, he said it would take many months for her to recover; so she was signed over to the CHPA and taken to the R&R, where she was treated. They found a vet, Dr Sarah Peters, who was able to treat her with acupuncture; this was successful, so she is now able to move freely around her paddock again. In December last year, she gave birth to a foal, called Lady Di, who was adopted some time in May this year. Interestingly, all the foals born at the R&R are given royal names.

Beauty, the bay in the next paddock, is also looking for an adoptive home. She comes to say hello to Oumie, and they touch noses, whickering softly.

Louis introduces us to Mona Lisa, a feisty little grey pony with a bright curious look in her eyes. She is leaving the R&R on Tuesday to move in with her adoptive family, which is wonderful news. The CHPA is always looking for suitable adoptive homes for the cart horses that have been confiscated or retired.

The last horse he shows us is Jan Vonk – a magnificent dark bay stallion, with a long flowing mane and tail; he looks big and powerful. But his legs are irrecoverably damaged from too heavy work on hard roads. He has become the R&R Centre Mascot.

When I reach out to touch him, Louis cautions, “You must pat them firmly, not too gently; these horses aren’t used to getting much love, or being touched too gently or softly – it makes them nervous. So just be firm with him.”

There is also a spacious undercover arena on the premises, which Louis has cleared out since coming to the R&R a mere three months ago. The floor is covered in a nice thick layer of sawdust and wood shavings, and from the letters mounted against the walls, I can tell that it is set up as a dressage arena. They also use it to lunge horses that have recently been gelded, or horses that just need to ‘run off some steam’. Louis tells us that he has already been asked by other horse riders in the Firlands equestrian estate whether they can use the arena to exercise their horses, particularly when the weather is bad. Charging for the use of the arena can bring in some much-needed extra income.

Our last stop is the stable block, where the two grooms – Rhyno Meyer and Gershwin Anderson – are hard at work, cleaning out the stalls. The third groom, Bollo, is away at the moment. The grooms have sleeping quarters on the premises, right behind the stable block. Usually, there are three grooms on duty, but on the weekends, there are sometimes only two. The horses are brought back to their stables every night, and I notice that each horse has its own stable with nametag. They are also groomed every evening – and with so many horses at the R&R, it means that each groom is responsible for between 3 and 5 horses.

They are removing the manure and the wet wood shavings, but trying to leave as much of the clean shavings as possible – it is expensive to put down fresh bedding every day, and they try not to waste anything. The dry bedding is swept away from the centre of the box, and piled against the walls, which allows the floor to dry out properly.

Other rooms are used to store the fresh bedding, the feed, primarily bales of oathay but also lucerne, which is more nutritious, and the tools and equipment. One of the larger stalls is used as the ‘clinic’ – it already has lighting, so that they can see better when they work in the otherwise dark stables. Louis has plans to mount solid rings in the walls, so that the horses can be tied down properly on both sides, because some horses (like humans) don’t like visits from the vet or the dentist.

The place needs a lot of work, not just ongoing maintenance but also improvement – but essentially it comes down to needing more ‘hands on deck’ and more helpers who are willing to get their hands dirty.

Nonetheless, we are very impressed with how good the place looks and how happy the horses are here. We are particularly impressed at how much Louis knows about each of the horses in his care – each of them has their own story, and their unique quirks and characteristics. At the moment, they have 15 horses there – I think they have capacity for 16 – and four of those are youngsters who would benefit from more human interaction.

I’m not surprised the horses love being sent there to recuperate! I would too!

2 thoughts on “Healing the Body and Spirit of Cape Town’s Cart Horses: The CHPA’s Recovery and Rehabilitation Centre in Gordon’s Bay”