The Bluegrass region of Kentucky is famous for its magnificent horses and its superb bourbon whiskey.

Do you know why Kentucky’s nickname is ‘the Bluegrass State’? It is so named because of the bluegrass (Poa pratensis) that grows in the fertile soil of its pastures. Incidentally, this has also given its name to the distinctive style of country music that developed here, known as Bluegrass Music.

If you like a taste of the strong stuff, you may wish to follow the Kentucky Bourbon Trail, which links six distilleries in the area between Lexington and Louisville.

Alternatively, if the thudding of hooves across green pastures and the whinnying of contented horses makes your heart beat faster, then I suggest you visit the Kentucky Horse Park (Wikipedia and interesting YouTube video) just outside the city of Lexington – and some of the many other marvellous places for horselovers to visit. To find out why this specific area of Kentucky is such a heaven for horses, have a read here.

Located just off the I-75 north of Lexington, the Kentucky Horse Park is an equine theme park and competition facility dedicated to man’s relationship with the horse. Covering more than 1200 acres, it was officially opened to the public in 1978. It offers various daily tours and exciting annual events, such as the thrilling Rolex Kentucky Three-Day Event, scheduled for the last weekend of April, in which horses and riders compete in three disciplines: dressage, show-jumping and cross-country. Now that would be exciting to see!

You can explore the park on horseback if you wish, or sit back and relax on a horse-drawn trolley instead. You can learn about the history of the horse at the International Museum of the Horse.

Or you can watch the Parade of Breeds in the show ring, where the Park presents many different breeds of horses, dressing horse and rider up the way they would look in their native countries and teaching spectators about the histories of the various breeds. On the day we visited, the Parade had unfortunately been cancelled.

You can meet equine legends like Cigar and Kentucky Derby winner Funny Cide at the Hall of Champions, where a guide introduced a small group of visitors to some of the retired race horses that are stabled here. Some of the world’s greatest horses are living out their retirement years here.

The Memorial Walk of Champions is the final resting place of some of the most famous and successful horses, such as John Henry (1975 to 2007) and Alysheba (1984 to 2009). Many more graves are located throughout the Park (this page lists all of them and gives summaries of their life histories).

In additon, numerous gorgeous sculptures of famous horses, such as Man o’ War, Secretariat and others, are dotted all around the Park, memorialising their heroic deeds. For descriptions of these sculptures and the artists who created them, have a look here; I have quoted little snippets from there about the statues I photographed.

Man o’ War (sculpture by Herbert Haseltine) “was foaled in March of 1917 at August Belmont’s Nursery Stood just north of Lexington, and was considered the greatest Thoroughbred of the 20th century. Man o’ War won 20 of 21 races, with his only loss ironically coming at the hands of a horse named Upset. After retiring from the track to Sam Riddle’s Faraway Farm in Lexington, he became one of the top breeding stallions country, and was the sire of the Triple Crown winning War Admiral.” (info from here)

Sculpture of Secretariat from the opposite side

Secretariat (sculpture by Edwin Bogucki) “depicts the incredible Thoroughbred race horse that captured Thoroughbred racing’s Triple Crown and won the Belmont Stakes by 31 lengths. In this life-size statue, he is being led into the winner’s circle after his win in the Kentucky Derby by groom, Eddie Sweat with jockey Ron Turcotte in the irons.” (info from here)

The Spirit of the American Morgan (created by Gwen Reardon) was “sculpted in honor of the 200th anniversary of the Morgan Horse Association”: “The Morgan horse is compact and refined in build, with strong limbs, an expressive face, large eyes, well-defined withers, laid back shoulders and a well arched neck and a clean cut head.” (Wikipedia)

A close-up of this magnificent sculpture, perfectly expressing the Spirit of the American Morgan horse

Misty of Chincoteague (sculpted by Brian Maughan) is a playful tribute to the famous Chincoteague pony from an island off the coast of Virginia, depicted in Marguerite Henry’s children’s books.

Also within the grounds of the Horse Park is the American Saddlebred Museum; this is not only an educational centre for visitors, but also contains the largest collection of Saddlebred artifacts in the world, and its library houses more than 2500 books used for bloodline and genealogical research. 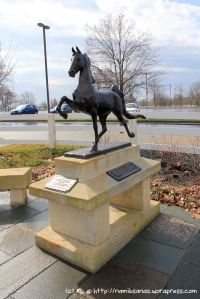 This is Wild-Eyed and Wicked

The American Saddlebred is a particular breed of horse developed by plantation owners in Kentucky, by crossing the Narraganset Pacer with the Thoroughbred and the Morgan.

These beautiful horses look quite flashy with their arched necks and flowing manes and tails, and their distinctive high-stepping and exaggerated gait, and they are very comfortable to ride. In addition to the walk, trot and canter, they can also perform ambling gaits known as the slow-gait and the very fast rack (see Wikipedia: American Saddlebred).

Our visit at the Kentucky Horse Park was unfortunately cut very short, because there was a tornado watch in the area just west of Louisville, which is where we were headed, as Richard was due to land there in the late afternoon, having flown eastwards from Albuquerque, New Mexico.

In fact, there was a tornado watch actually in Lexington, where we were, as the weathermen were expecting two super-cells to join and for the centre to be right in Lexington about an hour-and-a-half later!

Whole squads of reporters and television crews were assembling at the Park already, while people in the area were scrambling to get to safe places where they could shelter from the imminent storm. We had somehow found ourselves right on the edge of the tornado outbreak of 2-3 March 2012! 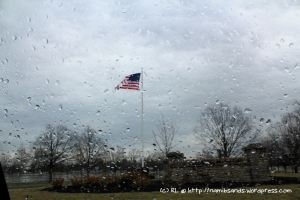 The rain is falling heavily now, and we need to get to safety

We had a brief and rather hurried meal at the Bit & Bridle Restaurant, where both the staff and the small groups of visitors were keeping a watchful and increasingly anxious eye on the television screen. As the weather was definitely changing for the worse, we quickly returned to our car and drove as fast as we could towards Louisville and the airport.

Luckily for us – though not for several communities of southern Indiana and southern Ohio – the cells changed direction slightly and Richard’s plane was able to land safely. We were all so relieved and grateful!

Oh jeepers, Tornado on the Ground!

When the tornadoes did touch down, they had bypassed Louisville by about 20 miles (which isn’t much actually!), devastating a large area of southern Indiana instead.

There are several YouTube clips – such as this one and this one and this one – that quite honestly terrify the bejeezers out of me! How those individuals could stand there with their cameras, filming the tornadoes going past, or even chasing them in their car, is utterly beyond my comprehension. I later heard that tornadoes had touched down in Alabama, Kentucky, Indiana and Ohio (storm time machine).

In the middle of all the drama, we need to drive out to Louisville Airport to pick up Richard who is supposed to be landing there in the late afternoon

“The deadliest tornado of the outbreak was an EF4 that carved a 49 mi (79 km) path of damage from Fredericksburg, Indiana, to Bedford, Kentucky. Along its track, the tornado destroyed hundreds of homes and killed 11 people. The most severe damage took place in the small communities of New Pekin, Henryville, Marysville, and Chelsea, Indiana.” (Wikipedia)

Anyhow, as a result of all this thrilling meteorological drama, we did not have time to explore the rest of this amazing park, nor to walk around the museums, nor to see any of the informative videos, nor to ride around the park on horseback… sigh… However, I do hope that I will have another chance to visit the Kentucky Horse Park some day! Here’s hoping that there won’t be any tornado warnings next time!