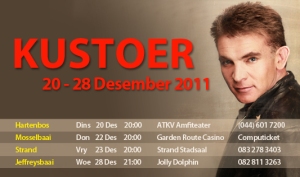 On Friday night, 23 December 2011, we drove out to The Strand with the Two Moms. We had bought some tickets for a concert at the local Town Hall.

Nope, it wasn’t for a concert by the SA Navy Band (who had held their Gala Concert there earlier this year): we were off to see Afrikaans singer-songwriter Theuns Jordaan perform live! 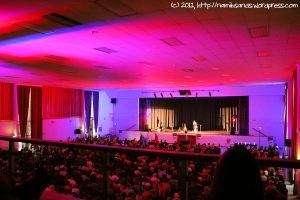 One of the singers who performs before Theuns takes to the stage - the hall downstairs is packed!

When I first heard his music last year, I liked it immediately. You can easily sing along with his melodies (he has some very catchy tunes), and his lyrics are beautifully poetic, ranging from the light-hearted and playful to the emotional and melancholic, which is well-suited to his rich, deep, raspy voice.

Since he released his debut album Vreemde Stad at the local arts festival known as the Klein Karoo Nasionale Kunstefees (Little Karoo National Arts Festival) in 2000, he has performed all around the country, sometimes teaming up with other popular Afrikaans singers (such as Juanita du Plessis and Bobby van Jaarsveld), and he has brought out numerous excellent albums. 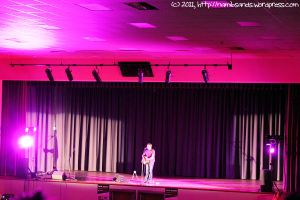 Theuns performing some solo pieces on the guitar

When I thus saw on his website that he was doing a Tour of the Coast, which included the small towns of Hartenbos, Mossel Bay, Strand and Jeffrey’s Bay, we immediately rushed off to buy tickets. As Afrikaans music concerts are often suited for the whole family, we thought that the Two Moms would enjoy it too.

After an early supper at home, during which we played some of Theuns’ music to get us into the mood, we drove through to The Strand. To our great astonishment, all the parking areas were chockablock full, and everyone else seemed to have arrived hours earlier! Clearly, Theuns was hugely popular in the Western Cape! 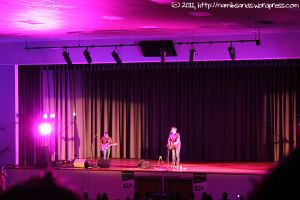 Theuns is joined by Anton L'Amour on electric guitar

Richard dropped us off at the entrance, and while he went cruising around to find an empty parking spot, we made our way inside to see whether we could find some seats. The hall downstairs was so packed, that there were only isolated empty chairs – though no doubt most of those had been ‘bagged’ already by early arrivals, who had gone off to join the queue at the drinks table.

By now Richard had rejoined us, and so we made our way upstairs to the gallery, which was also very full. We were extremely lucky to snag four seats, two-by-two, along the one side. By the time the concert started, people were sitting squashed together on the stairs, and a whole lot more chairs had been brought in from somewhere to fill the hall up even more!

The man singing on stage when we arrived was replaced by a woman who also sang a couple of pieces (I caught neither of their names), and then there was a short break, before Theuns stepped onto the stage himself.

The crowd (ranging in age from the very young to the elderly) erupted into cheers and applause, welcoming him enthusiastically. He played a couple of beautiful solo pieces, just him and his guitar, which we all really enjoyed.

As soon as he was joined onstage by Anton L’Amour, playing electric guitar, the backing track started up, and it became seriously loud. The first pieces he played (like Kouevuur, Hanne, Namibsroos and Soos Bloed) were familiar to me from his older albums, so I was singing along happily, and then he gave us a couple of ‘appetisers’ from his latest, not-yet-launched album, which also sounded very nice!

Anton and Theuns on stage

We were thoroughly enjoying the music and the vibe was fantastic, BUT it was all uncomfortably, painfully loud. I stuck my fingers in my ears for most of the time, which helped, as I could actually hear and understand the lyrics far better – otherwise, they were drowned out entirely by the backing track and the din from the nearby speakers.

Even when Theuns was speaking in the pauses between the tracks, the microphone was so loud, that we couldn’t understand what he was saying, and in fact sometimes wondered whether he was speaking Afrikaans or English.

We held out until the interval at about 21h15, and then decided to call it quits. It was simply too loud to enjoy the music or to hear the lyrics.

I honestly do not know why some musicians and bands feel the need to amp up their volume.

Louder is NOT necessarily better.

I hate walking out of a concert with my ears ringing and feeling as though they are full of cottonwool. I hate being unable to hear normal speech for an hour or more afterwards, and having that ringing note in my ears for the rest of the night. Hearing loss is permanent; those tiny little cells in your ears do not regenerate – they’re gone, forever. But I want to be able to hear properly until a ripe old age, so that I won’t have to ask people to shout or to repeat themselves, or to turn up the volume on the radio or the telephone, because I just cannot hear or understand what they are saying.

I so wish we could see him perform in a small, intimate venue, without big amplifiers, banks of speakers or loud electronic backing tracks: just him, his deep, raspy voice, and his guitar. Okay, some backing tracks, but not so loud they drown out his voice. Now that would be an amazing, magical experience. 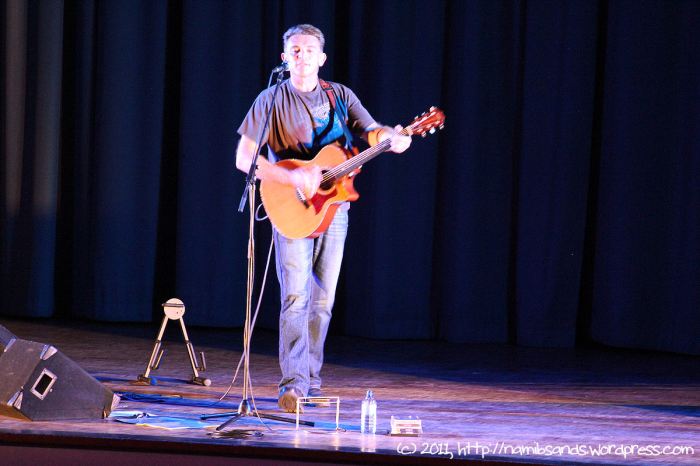 How about it, Theuns? Just you, your guitar, and your amazing voice?