Everywhere, families and friends are sitting on the grass, picnicking or just chilling

The joyful melodies of Christmas carols rang out across the lovely De Waal Park in the Gardens this evening, as families and visitors from near and far joined the Friends of De Waal Park and the Salvation Army Band in creating some Christmas cheer.

The last time we had been to the Park was in February this year, when we had attended a concert by the SA Army Band Cape Town, organised by various Lions clubs (I’d written about that here). This had happened to coincide with a visit by mom-in-law Lissi, with whom we had spent a whirlwind week doing all manner of interesting touristy things in Cape Town.

When I thus received a notification from the Friends of De Waal Park that their traditional Christmas Carols by Candlelight would be held on Tuesday, 20 December 2011, I immediately added it to our List of Very Important Things To Do over the festive season. By good fortune, mom-in-law arrived on the same day as the Carols by Candlelight, and you can thus guess where we dragged her and my own mom to that same evening!

Always game for a relaxing picnic, to the accompaniment of beautiful music, and in cheerful company, we quickly made ourselves comfortable near the pagoda. I bought some candles and carol sheets from the Friends, and we spread out our picnic goodies, as the Salvation Army Band went through a couple of warm-ups, prior to the start of the concert at 19h00. The band leader (I don’t know what his name was) walked around the spectators, welcoming us to the concert. The candles had been cleverly pushed through the narrow tops of cooldrink bottles cut in half, to protect the flames from the breeze  – but we still had to keep lighting them from each other, amidst much good-humoured bantering with fellow picnickers. 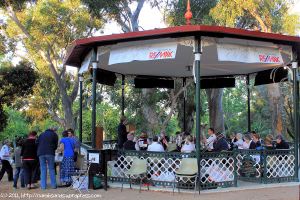 The Salvation Army Band in the Pagoda

Throughout the evening, the announcer encouraged us to sing loudly and enthusiastically, as a blustery wind had started to blow, and we obliged with as much energy as we could muster on this leisurely Tuesday afternoon, at the end of a warm summer’s day.

We went through O Come All Ye Faithful, Away in a Manger,  Hark – the Herald Angels Sing, The First Nowell, God Rest You Merry Gentlemen, and While Shepherds watched their Flocks by Night, with even Rudolph the Red-Nosed Reindeer making an appearance! Inbetween the carols, we had a couple of Bible readings, and the littlest ones in the crowd were told the adorable story of the Littlest Angel, which had them all quite enthralled. We ended with the traditional Silent Night and We Wish You A Merry Christmas, and all too soon, as the light began to fade, it was time to pack up our picnic blankets and fold up our chairs, and tidy up around us.

It had been a lovely concert, in beautiful and peaceful surroundings, and the sense of neighbourliness and community spirit had been quite wonderful. We definitely look forward to next year’s Carols by Candlelight!