The Taal Monument from a distance

During the summer months, the Taal Monument – or Afrikaans Language Monument – on the rugged granite hills overlooking the pretty town of Paarl, about an hour north of Cape Town, hosts full-moon picnics and stargazing picnics on the grounds of the monument.

This year, their first full moon picnic of the summer season was scheduled for 8 October 2011. Strictly speaking, this was two days before the full moon, but that is because the full moon does not, unfortunately, always fall on a Saturday. I was intrigued to see that they also offer stargazing picnics, in collaboration with the stargazing club Orion Observation Group (OOG), where you can learn all about the stars in our night sky. I think this sounds marvellous!

Two years ago, our friends V and L had invited us to join them for one of these full moon picnics, and the post I’d written about this had been Freshly Pressed – which was a huge thrill! This year, we were really looking forward to the start of the picnic season at the monument, especially as it would be Little N’s First Full Moon Picnic. 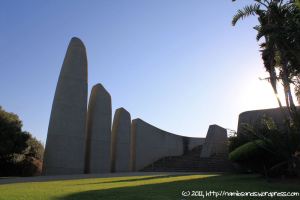 The design of the language monument expresses the central idea that the development of Afrikaans was influenced by languages from three continents - Europe, Asia and Africa

We took along Mom, L and V invited some friends, and so it was a large and cheerful group that spread out their picnic blankets, set up their folding chairs, and unpacked their cooler bags on the spacious green lawns that evening. There was a huge spread of delectable treats that made all our tummies rumble in happy anticipation.

As the hour just before sunset and just after sunset gives the best light for photography by painting the world with a warm, golden glow, I left Richard in charge of dissecting the grilled chicken and buttering the bread, and went exploring with my camera. (It’s one of the perks of being the designated photie – you’re [partly] exempt from the usual womanly duties of feeding the hungry hordes!)

Even though the Taal Monument was officially opened as recently as 10 October 1975, it feels much older, with a far longer history that reaches back through the ages. It is a very photogenic place, but because of its sheer size, you really need a wide-angle lens to fit it all into a photo, or to put some distance between yourself and the monument. This is why I ended up photographing it in small sections!

The monument was designed by architect Jan van Wijk:

“It commemorates the semicentenary of Afrikaans being declared an official language of South Africa separate from Dutch. Also, it was erected on the 100th anniversary of the founding of the Genootskap van Regte Afrikaners (the Society of Real Afrikaaners in Paarl, the organization that helped strengthen Afrikaners’ identity and pride in their language.” (Wikipedia)

On the official website, you can find a document explaining the symbolism of the monument, with an illustrative photo; I’ll quickly summarise it for you here.

The central idea is that languages from three continents (Europe, Asia and Africa) influenced the development of Afrikaans. 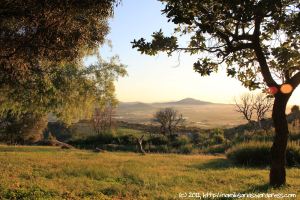 Given our surroundings, I was particularly conscious of these shifting language dynamics.

It was interesting to see how we switched among the languages during the course of our conversations: our language choices were influenced by the topic we were speaking about, the person we were speaking to, our level of confidence in speaking another language, and our wish to make the other person feel more comfortable by speaking in their primary language. Most of these choices were very subtle and unspoken, shifting from one moment to the next. 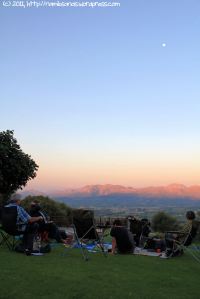 We have a relaxing picnic on the lawns around the monument - good times with good friends!

One of the things I like so much about Afrikaans is that it is a uniquely South African language – although it has, admittedly, spread far and wide across the globe as a result of two or three decades of emigration. Regardless, South Africa will always be its birthplace. When I heard it spoken on the handful of occasions when I was overseas, it reminded me instantly of home. It made me feel homesick and it awakened a sense of patriotism, a nostalgic longing for the country where I was born. This happened in a nano-second, without me even realising it. And it’s not even as though we regularly speak Afrikaans at home, nor do I have a vast library of Afrikaans literature.

And yet… and yet…

I often wonder whether others feel similarly about their ‘home’ languages or ‘mother tongue languages’, or whether all this global village stuff is blurring the boundaries between nations and nationalities, cultures and civilisations. I’d love to hear your thoughts about this.

And now – I hope you will enjoy the slideshow!