“Do you feel like doing the Amphitheatre hike tomorrow morning?” inquired hubby on Friday night.

“Great, so how about we get up reallllly early…”

“We’ll have a quick breakfast, and then it’ll take us about 45 minutes to get to the booms at Silvermine, so we should be able to start our hike by about 6h30. Then we can have a picnic on the mountain for breakfast.”

Once I’d gotten over my astonishment at the fact that hubby was actually willing to get up at… before?… the crack of dawn to go hiking with me, I adjusted the radio alarm on the nightstand and set the alarm on the cellphone, just in case we slept through the radio alarm. And then I got all the usual stuff ready – rucksack, water bottle, thermos flask, clothing, jackets, caps, sunscreen, boots, camera… – before we went to bed.

During last weekend’s gentle hike to the waterfall at Silvermine East, we’d seen the new waymarkers identifying the route to the Amphitheatre, and I’d enthusiastically declared, “Let’s do that one next week! I can take some photos and write about it on my blog.” 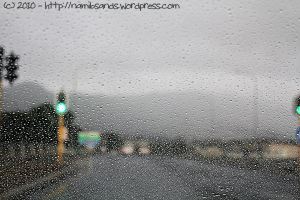 A rainy early morning in the southern peninsula

As sometimes happens when one is excitedly looking forward to something, like exploring a new hiking route, for instance, I slept rather restlessly. Mind you, it was close to full moon, and Tuffy-Cat was having a sleep-interrupted night herself, and as she enjoys leaping onto the bed – and onto legs, arms, or stomachs concealed beneath the duvet – with considerable vigor, it perhaps wasn’t entirely surprising that I was wide awake even before the alarm went off.

We had a hurried breakfast, packed the car, and drove through to Silvermine Nature Reserve. The further south we drove, though, the wetter the windscreen became. The clouds hung heavy over the mountains, completely shielding the mountains of Silvermine from view. As we looped up Ou Kaapse Weg, we encountered groups of cyclists who looked totally drenched, and the oncoming cars had both headlights and window wipers on. Oh dear.

We stopped at the booms on the eastern side, just as the drizzle became heavier. The rugged hills we wanted to explore were hardly visible behind a drizzly haze. The friendly security guard, wrapped up in waterproofs and a woollen beanie, obligingly left the shelter of the guardhouse, and came over to ask whether we really wanted to go for a hike…

No, I guess not. Well, not right now anyway.

Cold, wet, windy... not the ideal weather for hiking - and how am I supposed to take photographs in this rain?!

We drove back home. The mountains of the Southern Peninsula would have to wait until the curtains of rain had lifted. After an hour’s sleep, wonderful, restful, deep sleep, we awoke refreshed – and with sunshine breaking through the clouds. As our gear was already packed, we leapt into the car and headed straight back down to Silvermine. The guard positively beamed at us when he opened the booms.

Despite the promising improvement in the weather, this became the wettest walk we’d done since the middle of winter, when we’d hiked near Jonkersdam. We hadn’t even gotten this wet during our short hike in the mist along the Hillcrest path at Silvermine West!

We start our hike to the Amphitheatre at the large signboard

By the time we had reached our destination, the sandy floor of the Amphitheatre, our trousers were completely soaked from top to bottom, and the rain had even seeped through my socks into my boots (by capillary action, perhaps?). My poor hubby, who didn’t have a hood on his otherwise very snuggly windbreaker, was blinking away raindrops and shivering from the rain that was trickling down the back of his neck. Poor dear.

Quite honestly, the Amphitheatre was a lot less… um… grand and theatrical than I had expected from something called an Amphitheatre with a capital “A”. The surrounding boulder-covered mountain tops were hidden by the low mist. We stood miserably next to the stone pillar with the map ontop, which reassured us that we had indeed reached our goal, as the drizzle continued to soak and soak and soak into us, and debated which route we wanted to take back to our car.

The drizzle is so heavy, that I cannot take any photographs until we reach an overhang overlooking the Amphitheatre

We really didn’t feel like climbing back up the Crassula path, and retracing our steps across the charred field of protea bushes and boulders, where a fire must have swept through some months ago. Eventually, as we really couldn’t get much wetter than this, we decided to forge ahead by exploring the Klein Tuin Kloof route along a road called – alarmingly – “Dooiemanspad” (Dead Man’s Road).

“I think we should have a picnic first,” I declared.

“No, of course not! We’ll find shelter… somewhere…”

And we did – well, kind of. We squeezed through a gap between a couple of huge granite boulders, no doubt piled higgledy-piggledy ontop of each other by some primordial giant, and found a more or less dry spot underneath a rocky roof. Some annoyingly persistent drops of rain still somehow managed to trickle down and land on us, but it was a mere fraction of the rain that was being driven in sheets backwards and forwards by a howling wind, and soaking the landscape. Brrr… 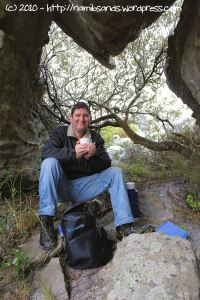 We find shelter beneath some rocks, for a rather damp picnic

A couple of cups of steaming hot thermos flask tea warmed us up from the inside, and restored the feeling to our hands. Ahhh… we sighed contentedly, as we sipped our tea, ignoring the fact that trousers were clinging wetly to the skin, and that socks were making an unpleasant squelching sound inside boots.

Suddenly, our reverie was interrupted by a barking sound, repeated again and again in the swirling mists… Hm, that wasn’t a dog… Baboons? Oh great. Just what we needed now. Richard, copying the sound, emitted a few sharp barks himself. They echoed among the rocks.

“Don’t! You’ll just make him angry!” I was already picturing the arrival of a troop of baboons, led by a furious Big Chief, thumping his chest and declaring his willingness to fight the intruder to the death!

“Naah,” said hubby, “I’ve just told him to keep his distance. This is our shelter for now.”

On Dooiemanspad, the view has opened up all the way down the valley towards Noordhoek

And it seemed that he must have found the right words, because, although the sound continued for a while, our picnic was not interrupted. As it didn’t seem as though the rain would let up anytime soon, we reluctantly re-packed our rucksack, and I stowed the camera away safely. Then we set off along a well-defined mountain track through dense growths of flowering fynbos that would’ve been an absolute pleasure to walk along on a sunny day.

No more photos were taken until we had reached the foot of Klein Tuin Kop, when the clouds suddenly lifted just a little bit, and it stopped raining. The view from here, down the valley towards Noordhoek in the west, was quite captivating. We’d definitely have to explore this route again. And it was an easy (albeit somewhat longer than anticipated) walk from here back to the car. And I’m pleased to report that we didn’t encounter any Dead Men. 🙂

Screenshot from Google Earth showing our route (in red); the ‘X’ marks our destination: the Amphitheatre

Cold, wet, windy… not the ideal weather for hiking

A rainy early morning in the southern peninsula

We start our hike to the Amphitheatre at the large signboard

The first part of the route is along the jeep track

We stride along, the blustery wind at our back

Just past the turn-off to the Waterfall, this route marker indicates the recommended route to the Amphitheatre

The drizzle is so heavy, that I cannot take any photographs until we reach an overhang overlooking the Amphitheatre

The path down to the sandy Amphitheatre

We are thoroughly drenched by the time we reach this welcome route map: You are here!

We find shelter beneath some rocks, for a rather damp picnic

A few cups of HOT tea soon revitalise us, and we are ready to continue with our hike

For the next half hour, no photos are taken, as we trudge through the rain

Suddenly, amazingly, the clouds lift – and I whip out the camera!

A route marker points the way at an intersection

Looking back, we can see the line of Ou Kaapse Weg carved into the mountain side opposite

Colourful orange flowers stand out against the blackened bushes

We cross a tiny rivulet

The mountainside above the path is overgrown with ferns

On the opposite side, the view has opened up all the way down the valley towards Noordhoek

I guess this must be a kind of protea – the flowers look as though they are on fire!

Our sandy track has rejoined the jeep track

These pink flowers are just exquisite

A little orange-breasted sunbird perches on a distant shrub, chirping his goodbye song!

8 thoughts on “The Walk that almost wasn’t: A decidedly un-summery hike to the Amphitheatre”

Follow Grains of Sand on WordPress.com
Join 312 other subscribers