After the closing of the Castle for the night, and giving everyone a big fright with the musket- and cannon fire, all the participating bands marched onto the arena for the exciting First Muster.

Centre stage was taken by the SA Army Band of Cape Town in their startling red tunics, with the Army Band of Kroonstad and the Army Band of KwaZulu Natal, both in brown tunics, lining up towards the north. The South African Police Services Band of the Western Cape in their dark blue uniforms, and the visiting Army Band from the Rwandan Defence Force, took their position towards the south. Two electric guitars and a drum kit were set up in the front, as the massed bands launched into some rollicking military music to get the audience into the mood for a thrilling evening’s entertainment. 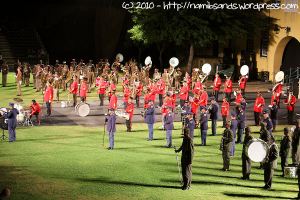 The South African Army Band of Cape Town is the country’s oldest Regular Force band, having been formed in 1915 as the regimental band of the 1st Battalion, the Cape Corps. The band alternated between part-time and full-time service during the first half of the 20th century, before returning to full-time service once more.

“The band has an extensive repertoire, ranging from orthodox military items to classical, romantic, pop, avant-garde and ‘big band’ music, and also trains bandsmen from surrounding countries. The Director of Music is Major M. Chandler, who has served in the band for many years. His drum-major is Warrant Officer Class 2 A. Van Schalkwyk.” (Program notes)

The popular South African Army Band of Kroonstad was formed on 1 April 1997, and serves a large geographical area in the central interior of the country, although they do also travel northwards and towards the coast, for instance, to participate in the CT Military Tattoo!

The South African Police Services (SAPS) Band of the Western Cape was established on 16 October 1968, more than 40 years ago.

“Police bands represent and market the SAPS as an organization at events where they perform and they use the universal language of music to bring communities closer together and to unify people from different cultural backgrounds. They also ensure that the image of the “dignified blue” is portrayed to the public and that a sense of pride is fostered in being a police member, in order to build morale and camaraderie in the internal environment.” (Program notes) 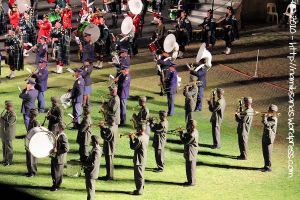 Rwanda Army Band in the foreground, SAPS Band next to them

And suddenly, the roll of drums and the unmistakeable humming of bagpipes, echoing from the Kat archway, signalled the arrival of the massed pipe bands: the Pipes and Drums of Cape Field Artillery Regiment in their Royal Stewart tartans, the Drums and Pipes of the Cape Town Highlanders in their Gordon Regimental tartans, and the Pipes and Drums of 1 Medical Battalion from Durban in their Mackenzie tartans. 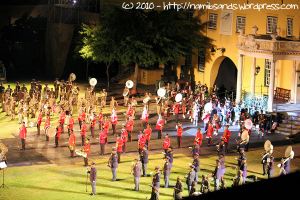 Ahh! The pipes and drums arrive!

SA Police Service Band of the Western Cape (in blue)

Rwanda Army Band in the foreground, SAPS Band next to them

Ahh! The pipes and drums arrive!

They fill in the gaps between the ranks

The stands are almost full

The spotlight operator watches everything from the top of his tower

Colourful lights are playing on the grass…

You can only really see these lights from the top of the roof – what a treat!

One thought on “Cape Town Military Tattoo 2010: The First Muster”