During the recent school holidays, the boys and girls making up the drill squad of the Western Province School Marching Drill and Exhibition Association (WP SMDEA) were drilled by members of the SA Army Band Cape Town (see previous post) in preparation for the Cape Town Military Tattoo to be held at the Castle of Good Hope from 03 to 06 November 2010. The drill squad will form part of the pre-show entertainment on each night of the Tattoo, to illustrate the involvement of the Defence Reserves with youth development and skills training.

After a long, hard Monday spent drilling on the parade ground at Youngsfield Military Base in Wynberg, Cape Town, and practicing their routines, on Tuesday the youngsters were given a special treat in the form of a visit to Simon’s Town and the Naval Dockyard to teach them a little about the opportunities offered by the South African Navy.

When the learners arrived at Youngsfield Military Base off Wetton Road in Wynberg on Tuesday morning, they were greeted by Staff Sergeant Jerome Mecloen and WO2 André van Schalkwyk. There was just enough time for some much appreciated biscuits with tea or coffee. Initially quite shy, most of them longingly eyed the bowls of biscuits from a distance, but when WO2 Van Schalkwyk declared that they all had to disappear before we could get back onto the bus, nimble hands emptied the bowls in record time! 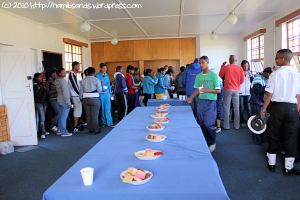 Tea and biscuits are served

We quickly piled into the small school combi and the large bus provided by the Defence Reserves Provincial Office of the Western Cape (DRPOWC), and headed down to Simon’s Town. Our first stop was at the entrance to Seaforth Beach, from where we power-walked along the boardwalk above the Boulders Beach penguin colony all the way to the end. Here the youngsters enjoyed themselves by looking at the penguins and taking photos of each other clambering all over the massive granite boulders. (I previously wrote about the penguins of Boulders Beach here, if you’re curious.) 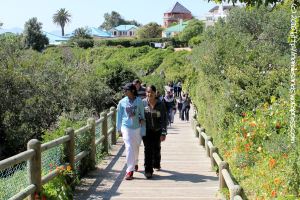 It is very pleasant to walk along this sturdy boardwalk

Invigorated by the walk in the fresh sea air, we made our way back to our buses, which took us to the Public Relations Department in the Naval Base Simon’s Town.

Here we were joined by Seaman Makhubela and Seaman Mfengu, the two public relations guides who had been assigned to us for our quick tour of the base. We parked next to the Synchro Lift, which “can lift vessels of up to 2 000 tons out of the water onto a platform from where they are transported on a series of rails to open ‘parking bays’ or one of two sheds for easy access by the repair and maintenance teams” (info from here). The learners quickly lined up in three orderly rows, as the guides in their neat black and white uniforms introduced themselves to the group and told them a little about the SA Navy. 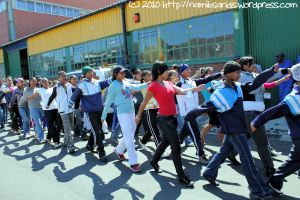 Then the learners displayed some of their drilling skills by marching down to the Pump Station, where Seaman Makhubela showed them a torpedo displayed outside the building. The next stop was the humungous Selborne Dry Dock in the East Dockyard, where one of the four new valour class frigates of the SA Navy, the SAS Isandlwana (F146), was being serviced. 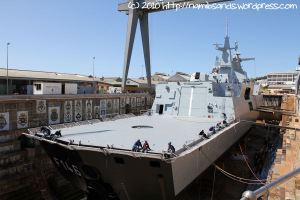 The SAS Isandlwana is being serviced in the dock

The dry dock is named after the Earl of Selborne, who laid the foundation stone in November 1906. Construction of the dry dock finished in November 1910; it is 231 m long, 36.58 m wide, and 13.7 m deep, and it can hold up to 99 million litres of water. It can be subdivided into two sections by an intermediate caisson. In November this year, the dry dock will be 100 years old, and special events are planned around it, including the publication of a commemorative book. During the annual Navy Festival held at the naval base in Simon’s Town, there is usually a concert held in the actual dry dock; it is a spectacular venue! (I wrote about the 2010 concert here.)

Seaman Makhubela explained the relevance of the colourful badges painted all around the walls of the dock, some of which look very old and faded, whilst others look brand new; these are all the badges of ships that have been repaired or serviced in the dock. It’s a curious and colourful way of displaying the history of the dock. 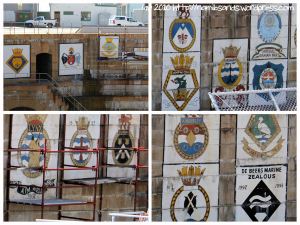 Some of the ships badges

From here, we marched past the SAS Spioenkop (F147), which is another of the new valour class frigates that were built in Hamburg and Kiel, Germany, between 2000 and 2005 or thereabouts. The other two are the SAS Amatola (F145) and the SAS Mendi (F148).

We soon reached the two tugs, Indlovu and De Mist, which were lying at anchor. Our two guides spoke to the youngsters about the different types of vessels in the harbour. The group were also curious about the training received by recruits, and the range of skills needed, including technical, engineering, computer skills, etc.

We took a group photo in front of one of the tugs, before we continued to our final stop, the submarine workshop, near which two of the new 209 Class submarines (replacements for the old Daphne Class subs) were lying at anchor. All three of them had been built in Kiel, Germany. The SA Navy has three of these new submarines – the SAS Manthatisi (S101), the SAS Charlotte Maxeke (S102) and the SAS Queen Modjadji I (S103). Unfortunately, we were not allowed near enough to see them or to take photographs, because they were being inspected at the time. 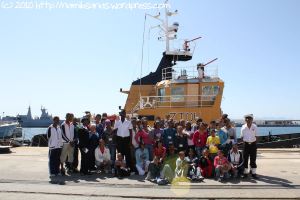 Here we said goodbye to our two friendly guides, and climbed back into the buses, which returned us safely to Youngsfield Military Base. As it was already midday, a tasty lunch of noodles and meat, accompanied by bread, fruit and yoghurt, was served at the restaurant known as The Train. 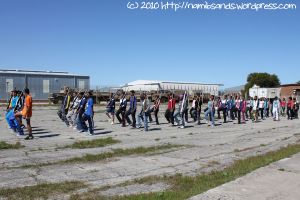 Marching in the afternoon sun

Afterwards, the learners worked off some of the post-meal lethargy by practising their marching routine on the parade ground. They benefitted from the sharp eyes of Ssgt Mecloen and WO2 Van Schalkwyk and their drill instructors, who gave plenty of input and instruction on the correct technique of marching and of handling the wooden guns, which they were using for their practice routines.

Tea and biscuits are served

Posing with their friends at Seaforth Beach

This is the view from the boardwalk down to the beach

It is very pleasant to walk along this sturdy boardwalk

The group lines up in orderly rows at the Naval Base

At the Dry Dock

The SAS Isandlwana is being serviced in the dock

Some of the ships badges

We eat a delicious lunch at The Train

And then it is time to drill again

It is hard work

Kneeling down one after the other

Marching in the afternoon sun

Practicing how to pass the wooden guns to each other

Everyone has to be perfectly in sync

Pointing the guns towards the sky

The drummers play a vital role in keeping them in sync

One thought on “The Drill Squad of WP SMDEA visits Simon’s Town: Home of the SA Navy”