Update: The article I wrote about this has been published in the Reserve Force Volunteer magazine of Summer 2011. Here is the PDF document.

Further Update: In December 2010, members of the Reserve Force office at the Castle brought Christmas to the children of Vaatjie. The article I wrote about the event was published on the Reserve Force Division website. Here is the PDF document.

Two months ago, in August, I had an opportunity to experience first-hand the combined power of networking and social responsibility in action, when I joined a group from the Defence Reserves at an event, which took place at a primary school in a very poor farming community on the West Coast. 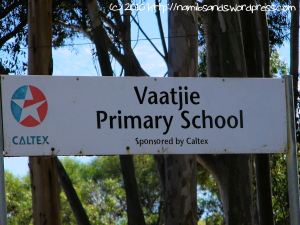 The preparations that led up to this event had started some time earlier.

Major Dalene Coetzee, who is the second in command (2IC) of Cape Field Artillery (CFA) (a Reserve unit I had written about when I described my very first visit to Fort iKapa in July), also happens to be a senior teacher at Tafelberg High School, a school for learners with special needs and learning difficulties. The school was relocating to the Northern Suburbs, and made available some of its furniture, books and equipment.

As certain items could be used for the Cape Town Military Tattoo (which will be held at the Castle at the start of November this year), Maj Coetzee passed on this information to Lieutenant Colonel Johan Conradie of the Defence Reserves Provincial Office Western Cape (DRPOWC) who is one of the people responsible for organising that event. As the school desks and books were clearly suited for a needy school, such a school was identified after some research.

Unloading the school desks from the truck

Vaatjie Moravian Primary School lies on the Old Mamre to Darling Road, between Atlantis and Melkbosstrand, surrounded by rolling fields with a view of iconic Table Mountain. It was founded as recently as 1967 to accommodate the children of the surrounding farming communities. The headmaster is Mr Neil September. It is a small government school, which currently employs 6 teachers and has 190 learners from Grade R to Grade 7. The children come from the surrounding farms and from informal settlements nearby; their parents are farm workers or domestic workers, but many are unemployed and thus quite poor.

And this is where the power of networking was demonstrated, as well as a wonderful spirit of voluntarism and the willingness to work together to achieve a common goal. Within a remarkably short time, literally only a couple of days, everything came together to make this event a reality.

Everyone lends a hand to raise the flagpole into position

Mr Willem van der Merwe and Mr Barend Kellerman, farmers from the small town of Porterville (which is near the Olifantsriver Mountains, see here, about 140 km away from Cape Town), and four of their farm labourers drove all the way to Sea Point with their large truck to collect the desks and books, and to deliver these to the school.

As the school principal had remarked that they did not have a flagpole or a flag, the Defence Reserves Office promptly decided to donate a South African flag and a storm flag to the school. Mr Van der Merwe generously agreed to supply the flagpole. AMS Engineering of Ottery prepared and provided the channel iron, which had to be attached to the base of the flagpole, to anchor it securely in the ground. They too did so free of charge.

The school desks and books were duly delivered to the school on the morning of 11 August 2010. Then, while the men were hard at work, digging a deep hole for the flagpole and raising it into position, Ms Elsette Musso of DRPOWC and her team of helpers set out the tables with table cloths, food containers, bowls, spoons, cups and paper napkins.

The kids marched out of their classrooms in a surprisingly orderly fashion, and proudly lined up in front of their new flagpole. We were all impressed to see how well-behaved and disciplined they were. And they were most intrigued to see the men and women in uniform! Some were a bit shy initially, but soon their natural curiosity got the better of them, and all the military personnel had to field hundreds of curious questions.

Lt Col Conradie gave a brief speech, as he handed over the South African flag to the principal. While Warrant Officer Class 1 Stephen Jordaan knotted the flag to the halyard (I tried to see how he did it, but all the knots got me confused – I’ll have to watch more closely next time!), he explained to the learners that the flag had to be treated with respect, and that it should never be placed on the ground, or used as decoration – even though that’s exactly what all of us had been doing in the run-up to the 2010 World Cup and for the duration of that event! But at least that did raise awareness of our national flag, and its association with the World Cup no doubt fuelled our sense of patriotism. 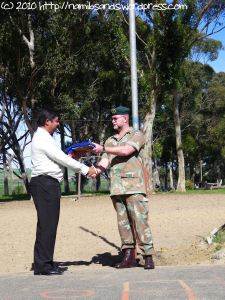 As the flag was ceremonially raised at the school for the first time, the military personnel crisply saluted, and even the children stood solemnly to attention, right hand on heart. They sang our South African National Anthem with such enthusiasm, that it was impossible not to have a lump in the throat and goosebumps going up and down your skin (you can watch the video of this on YouTube – and let me know what you think!).

The formalities over, the clearly hungry learners waited patiently in line for their turn to receive lunch, which was a bowl of rice and lamb stew with a slice of bread. The meal had been prepared by the Mess at the Castle of Good Hope earlier that day.

Their school participates in the school feeding scheme, and thus receives the ingredients for daily meals, which are prepared in their kitchen. They receive this meal at 10h00 every day, and for the vast majority of them, according to the headmaster, it is in fact the only meal of the day.

Can you imagine how hard it must be for a hungry child to concentrate on learning and remembering their lessons? I just know if I am hungry, then my attention span is close to zero, and I become decidedly grumpier and grouchier the hungrier I get. So it was amazing to witness how well-behaved and patient the older learners were, while the younger ones were served first.

The Reserve Force Council of the Western Cape had made money available to buy iced fruit lollies for dessert. As it happened to be a surprisingly hot August day (when it’s supposed to be winter in the southern hemisphere, after all!), these lollies melted away as quickly as… well… ice-cream handed out to kids in the desert! What a delicious treat!

After lunch, Sergeant Joan Jacobs of 3 Medical Battalion Group explained to the learners what the Defence Reserves were all about, and each of them received their own copy of the Reserve Force Volunteer magazines. The youngsters had a lot of fun looking at the pictures, and pointing out things to each other.

One of the younger kids bravely ran up to Lt Col Conradie, pointed to a photo in the magazine, and asked whether that was him; when Lt Col Conradie confirmed that indeed it was, the youngster beamed with delight, and ran back to his friends, excitedly declaring “I told you it was him!” So cute!

And then it was time to wave goodbye to the school, and to head back to the Castle, with a happy heart and a feeling that we had enriched the lives of the kids, even if only in a small way.

I hope you have enjoyed reading about this – and who knows, perhaps it’ll inspire you to keep your eyes open for similar opportunities in your area when they arise?

The truck has arrived in the school yard

Unloading the school desks from the truck

Boxes of books, including encyclopedias, children’s books and textbooks are delivered 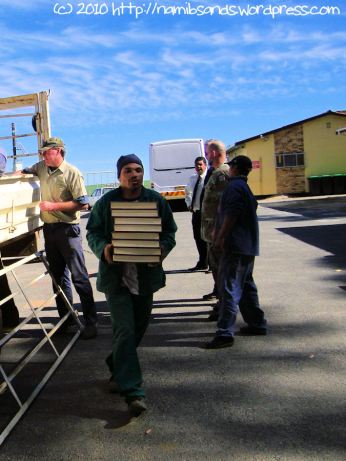 Encyclopedias sure are heavy!

Everyone lends a hand to raise the flagpole into position 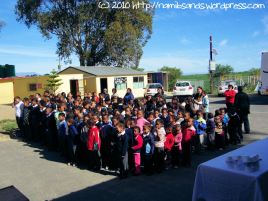 The school children line up in straight lines, clearly excited

Finally, it is time for lunch to be served

The little ones are clearly hungry! 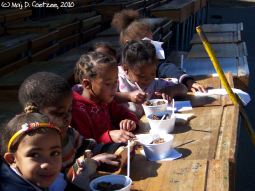 Everyone enjoys the lunch 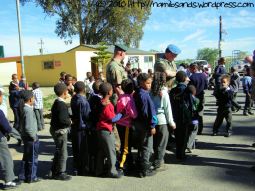 After lunch, iced fruit lollies are handed out to all the learners 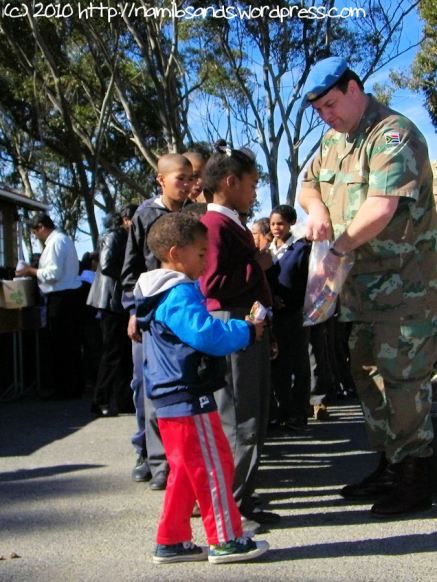 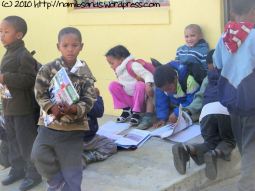 Even the younger kids enjoy looking at the pictures in the magazines! 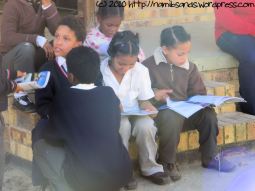 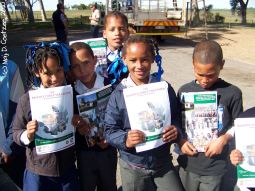 Posing proudly with their own copies of the magazine 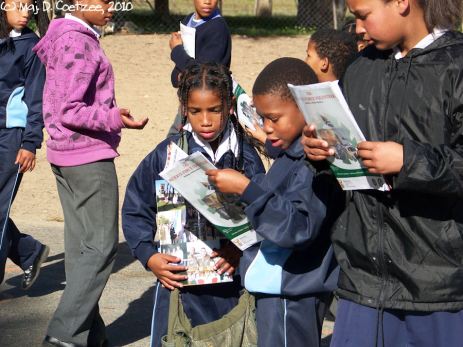 These little ones are fascinated by the pictures and stories 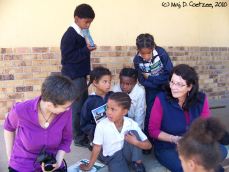 That’s me in the purple shirt, making friends 🙂

A group photo in front of the brand new flag!

P.S. You can download the official article we wrote about the Vaatjie Moravian Primary School (PDF). It has also appeared on the website of the Defence Reserves here.

P.P.S. With grateful thanks to Major Dalene Coetzee (Cape Field Artillery) and Sergeant Joan Jacobs (3 Medical Battalion Group) for the photos, and to Lt Col Johan Conradie for all his guidance and input.