As we drove through the entrance gate, I spotted the three bontebok we had seen here last time. This time, we stopped long enough so I could take a quick picture of these really beautiful buck. 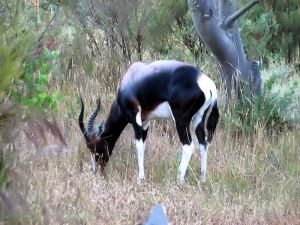 We set off from behind the visitors’ centre and found the gravel road that led uphill in more or less a straight line. (On the map, it’s the yellow line running up the right side of the reserve.)

Unlike last time, the weather this time around was pleasantly cool, with a gentle breeze, and clouds covering the top of the mountain.

Jeep track heading up the mountainside

After 10 mins, we came to a pedestrian gate, which we walked through. Just on the other side of the gate, a trail went off to the right. It didn’t have a marker, though, and we didn’t want to consult the map at this stage (for future reference: Consult The Map!). As a result, we continued following the Yellow Trail towards the left, until we came to an intersection. Here stood a route marker with four colourful boot-prints on it, indicating that the broad path going off here was the route to the Black, Blue, Red and Green Trails.

These beautiful birds – Promerops cafer – are endemic to the fynbos biome of the Western and Eastern Cape. Both male and female birds are grey-brown in colour, with a bit of yellow underneath their tail; the males have very long tail feathers and are larger than the females. “The main flight feathers are arranged in such a way that when the bird beats its wings, a frrt-frrt sound is made with the intention of attracting females” (Wikipedia).

They use their long, sharp beaks and brush-tipped tongues to feed specifically off the nectar from flowering proteas. They also have sharp claws, which allow them to hold onto the proteas, when the seasonal Cape winds are blowing. Isn’t that amazing? 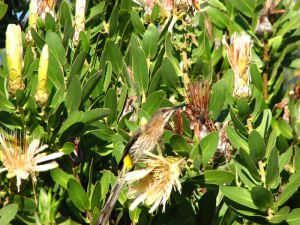 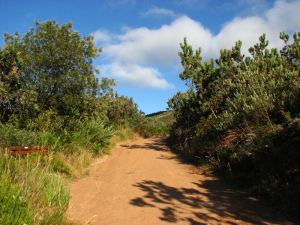 Trudging up the Black Trail

We’d been walking up the mountain for about 45 minutes. According to the description on the pamphlet, the entire Black Trail should take about 1 hour. But the road kept going up, and my blisters were on fire. Had we missed a turn-off?

A lot of uphill

Suddenly, after a lengthy trudge uphill, we came to a curve in the road.

That’s where we’d come from…

A very narrow track, quite overgrown, disappeared between the bushes on the left, while the gravel road we were on curved up and to the right. It didn’t seem like the correct direction to us.

I wonder where this track goes?

“Where on earth are we?”

“I think we need to get across the valley and down.”

“But ‘across’ which way? Left or right?”

“How about we see where this path leads. Perhaps it’s going to take us back down to the Yellow Trail?”

This odd plant was growing in the middle of the path.

The view from up here was beautiful.

The gentle foothills of the nature reserve

Boulders in the foreground 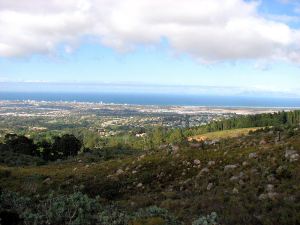 The Indian Ocean beyond Strand

We stopped when we reached a group of large boulders. In the distance, we saw a fence. Our sandy track seemed to be heading right towards an opening in the fence.

“I don’t think the path is supposed to LEAVE the boundaries of the reserve.”

“We’d better go back to the gravel road.”

Sigh. When hiking, I really dislike retracing my steps. At the intersection, we met two friendly hikers, resting on their walking sticks. They looked rather surprised to see us emerging from the bushes. 🙂

“Right, so we came up the straight yellow line, and then we took the black squiggly line next to the orange line…”

“No, I don’t think we did. The Black Trail is supposed to go through the river valley and down on the other side. We haven’t gone through the valley, have we?”

“Maybe we missed the turn at the intersection with the Blue Trail?”

“Hey! Look at the little white line there on the left – the one that goes from the left squiggly blue line to the edge of the reserve! That’s the narrow track we were on just now!”

Ahhh! We had found our bearings at last. “Right, well, it seems that we’re doing the Blue Trail after all.”

We set off, uphill, and further uphill, until we reached another intersection with this route marker.

The friendly hikers who had just helped us, were having a brief rest there too. They were heading either up the Red Trail (which is a contour path) or the Green Trail (which runs just underneath the rockface). They told us that it would be worthwhile for us to do a quick there-and-back to the Disa Gorge at the opposite end of the Red Trail.

We continued walking up… and up… the mountain.

The Strand in the distance

The view from up here was just magnificent. Just to give you an idea of how high up we were: If you look really closely in the picture below, you can see a large dam more or less in the centre of the picture, with a dark green wall of trees towards the right of the dam. Just in front of this large dam is a barely visible pond (white arrow). This is the Duck Pond near the restaurant.

View of nature reserve below

After a while, we came to a large intersection, with a couple of route markers. The Red, Green and Pink Trails went up, the Blue Trail went down. As per our fellow hikers’ suggestion, we briefly followed the Red Trail to the start of Disa Gorge… And found ourselves in an entirely different ecosystem from the fynbos and renosterveld we’d walked through thus far!

Walking towards the gorge

Suddenly, it felt as though we were in a Cape mountain forest, like Newlands Forest or the top of Kirstenbosch Gardens. It was refreshingly cool in the shelter of these trees, and a tiny stream was trickling and skipping down over rocks and boulders. We drank some water and apple juice, inhaled the cool air, and allowed the tranquility of this special place to seep into us.

From the start of the Yellow Trail, it had taken us a little over an hour to get up here.

We retraced our steps to the large intersection, and marched off down the hill. The descent was quite steep, and the loose gravel on the jeep track was very slippery in places. Having to put the brakes on all the time, and taking small cautious steps, took its toll on the ankles, knees and hips.

But walking so slowly did give me a chance to take some photographs. It was sooo peaceful here. And so quiet. There was a gentle breeze and clouds were scudding overhead, sending shadow and light flitting across the land. Birds were singing, whistling and tweeting all around. 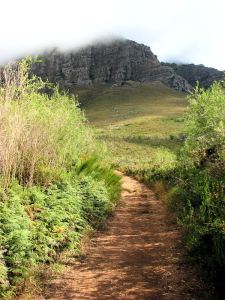 Looking back up the mountain

These pretty Ericas were flowering on the side of the road. 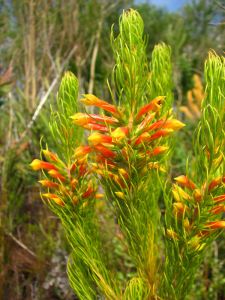 And I love the way the light shines through the leaves of these Proteas.

I think these are called Berzelia lanuginosa. Their flowers look like tiny ping-pong balls! 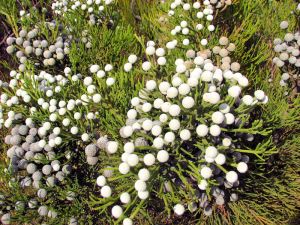 These Protea flowers had been burnt by fire. But they still looked beautiful!

I don’t know what these tiny pink flowers are.

This is a Protea aurea: 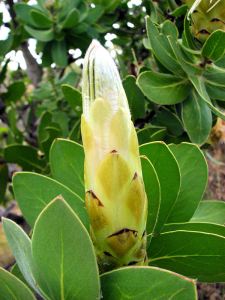 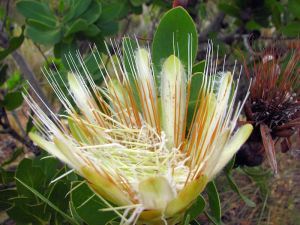 And open to the sun!

And then I spotted this little bird perched on a nearby bush. 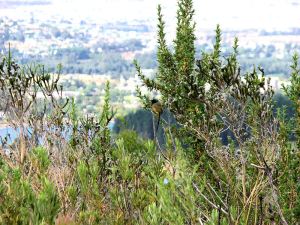 It’s an orange-breasted sunbird (Anthobaphes violacea), which is endemic to the fynbos areas of the Cape, and thus perfectly adapted to its habitat. They use their long and curved beak to drink nectar from Erica flowers, catch insects in flight, and eat spiders.

“As with other sunbirds the bill is long and decurved, that of the male being longer than that of the female. The bill, legs and feet are black. The eye is dark brown.

The head, throat and mantle of the male are bright metallic green. The rest of the upperparts are olive green. The upper breast is metallic violet and the lower breast is bright orange, fading to paler orange and yellow on the belly. The tail is long and blackish, with elongated central tail feathers, which extend some way, belong the other feathers.

The female has olive-greenish grey upperparts and olive yellowish underparts, paler on the belly. The wings and tail is blackish. The juvenile resembles the female.” (Wikipedia)

I can’t tell if this is a male or a female, but I’m sooo chuffed that it stopped long enough for me to take a photo!

One last look at the view:

Here you can clearly see the large dam with the wall of dark green trees on the right, and  the duck pond slightly in front of it. That was our destination. From up here, we still had to walk down the brown gravel road curving down the hillside, before we could replenish our energy stores with French toast, coffee, tea and capuccino at the Oak Café. Yummmm!

8 thoughts on “Hiking in the Helderberg Nature Reserve: The blue trail”