Here are a few more photos of our trip to the Cederberg, where we spent a fabulous, relaxing weekend at the Jamaka Organic Farm.

We left Cape Town shortly after 9am to avoid the worst of the Friday morning rush hour traffic. We took the N7 northbound, and passed the Swartland towns of Malmesbury and Mooreesburg about an hour later. There were vast golden fields of grain (mainly wheat, I guess) stretching out on both sides of the road, with the occasional hill sticking up. Here is a dam next to the road. 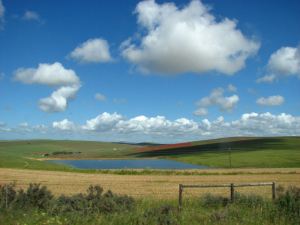 A dam near the road

Just outside Mooreesburg, we had to wait at a stop-and-go, because a road crew was repairing the road and only one lane was open.

An hour later, we passed Piketberg and Eendekuil on our way up the steep inclines of the Piekenierskloof Pass. There are viewing sites where you can pull over to admire the truly awe-inspiring view across the immense expanses of the Swartland region with its gently rolling hills, but we didn’t stop this time.

Heading towards the Piekenierskloof Pass

Half an hour later, approximately 28 km after Citrusdal (and about 28 km south of the next largish town of Clanwilliam), we reached the turn-off to ‘Algeria, Cederberg’. We must have passed this small dark-green sign dozens and dozens of times on our way to and from Namibia, but this was the first time we actually turned off onto the gravel road. It was so exciting!

Start of the gravel road to Algeria

This bridge crossed the Olifants River. There were piles of soft sand right up close to the bridge; I guess they must have been swept down by the river during floods.

The first part of the gravel road, more or less to the beginning of the curves that lead up the Nieuwoudt Pass, was in good condition. It looked as though it had recently been graded. Nonetheless, we did keep our speed quite far down to reduce the chances of gravel flying up and nicking our car’s paintwork.

A large truck was grinding up the long uphill on the other side of the Nieuwoudt Pass. We pulled over to leave more room for it to negotiate the bend, and to get out of the way of flying gravel as much as possible. 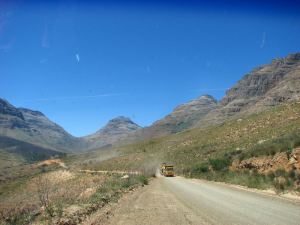 I tried to take a few shots through the window, as we drove slowly down the pass, approaching the turn-off to the Algeria camping site and the entrance to the Cederberg Wilderness Area. This is a shot of the valley, looking northwards.

Was this a settlement below? 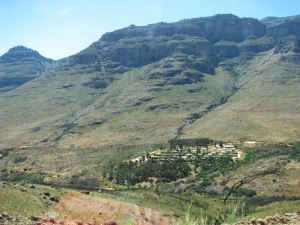 About 18 km after we had turned onto this gravel road, we reached the turn-off to the Algeria Forest Station. Here we turned left towards ‘Clanwilliam’. About 5 km further along a very rough gravel road, on which we couldn’t drive faster than 20-30 kph because we’d have wrecked our suspension, we reached Jamaka Organic Farm, our home for the next three days. Yayyy! 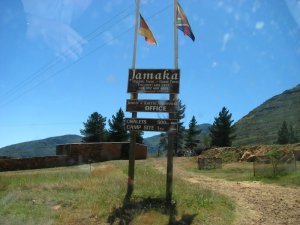 On Sunday morning, we left the farm about 12pm to make our way home again.

Here’s a final view of the valley from the top of the Nieuwoudt Pass. The farm in the middle ground is Jamaka. The green patch on the left, just to the side of the dark trees in the river valley, is the camping site. And you can just make out four white houses clustered in the centre of the photograph – the one furthest away was ours. 🙂 The weather was completely different to that of Friday – there were low clouds hiding the surrounding mountain peaks, and the wind was chilly up here. 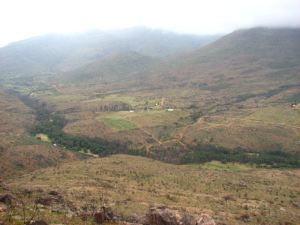 View from the Nieuwoudt Pass

We pulled in at Citrusdal an hour later, on a quest for a coffee shop that was open on a Sunday. (Sadly, these things cannot be taken for granted in the countryside.) The Outspan Coffee Shop mentioned in our Garmin navigator was closed. Luckily for us, the coffee shop / restaurant nextdoor (“Die Sitrus”) was open! So we warmed ourselves up with an energising capuccino and mochaccino – and shared a slice of chocolate cake.

Full of (coffee-)beans and in high spirits, we rejoined the N7 and roared southwards. There were two short stop-and-go’s outside Piketberg and Mooreesburg, where I took some photos of the surrounding fields. 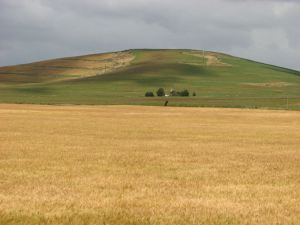 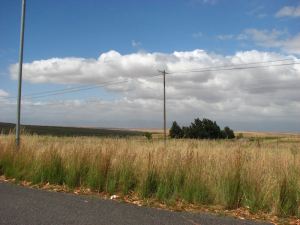 And around 3pm we got a first glimpse of the familiar silhouette of Table Mountain in the far distance. We were almost home. Oddly (because we don’t often get thunder and lightning here), there was quite a thunderstorm over the Peninsula when we arrived – had we brought the early morning thunderstorm from the Cederberg with us in our luggage? 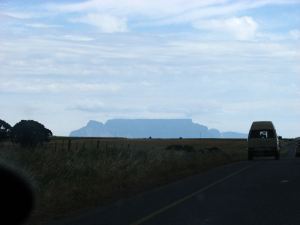 Table Mountain up ahead

Although it felt good to make it home safely, and wonderful indeed to be welcomed by a purring Tuffy-Cat, we did wish the weekend didn’t have to end so soon.

If you do see something really offensive, please let me know the details, send me a screenshot, and I Shall Go On the Warpath and complain to Wordpress Support.